Dust Off the Idols

Dust off the idols.
Give them something to eat.
I think they're hungry.
I know I'm starving half to death.
-- The Mountain Goats, “Elijah” 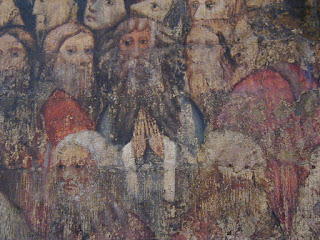 Again and again I need to relearn how to be alone, how to fill those sudden silences. It’s Spring, so I can leave the doors open, keep an eye on the fox in the field beyond the line of trees: a blooming peach, three budding apple, four dogwood with still-coiled leaves, wood shavings set to twirl from the saw blade. He’s stalking something.

There are endless consolations: melancholy choruses, minor keys, words rising from the page, a procession of impossibly distant stars, a new constellation. I can tell myself the stories I already know: that I was once young, that joy settles upon a life like the sweet breath of a sleeping child, its sweetness already tinged with the faint, nearly imperceptible scent of something sour.

Oh, go on now. It’s only March, and I’ve already prepared this year’s garden, though I was too lazy – or possessed, as usual, of too little faith – to mark what I planted where, so in a few weeks when all the leaves begin to sprout from the rocky soil (I sift and sift but the rock-to-dirt ratio is never altered) and it’s time to thin and weed, I’ll have to ask someone who knows what’s what what’s what, if you know what I mean. These tiny twin crescents? These little green hearts? Spinach? Chard? Peas? Beets?

And for fun, for the sheer pleasure of the asking: Turnstiles? Winnebagos? Cauldrons? Pantaloons? Krispy Kreme? Boy, this is getting away from me. It’s what always happens, my words gone wild, the very language itself supplanting the purpose to which I’d meant to put it, a gardener who again and again winds up growing only what’s inedible, favoring weeds over flowers, thorns over leaves, James Stevenson’s Worst Person in the World gone vacationing at Crab Beach. 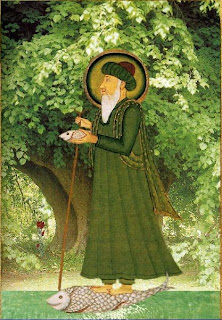 Back to the matter at hand: my laziness, my garden. I know, of course, exactly who I’ll ask what’s what: the shy Buddhist come home to care for his mother. He kneels in his garden’s bed like a supplicant, cradles in his palm the seeds he has gathered as though they are prized relics: the dry chalk of saints’ bones, the petrified tears of the Virgin Mary. Which tears, though? There could be so many. When she first learned that she would bear a child? When that child was born? When he was crucified? When the stone was rolled away and he was – without first visiting her, without offering her succor or consolation – gone?

Maybe he’s not really a Buddhist; maybe I made that up. But he ought to be or, to look at it another way, he is to me, and that’s all that matters. His industry is endless: plywood sawn to repair the barn, dirt sifted through and dug and planted, patterns of leaves examined, pinched, evaluated.

I am always amazed how little I’ve learned in my going-on fifty-two years. I would like to build a cold-frame, patch our walls’ peeling plaster, play music, sing, speak another language, believe.

Yes, that’s the one more than any other, of course: believe. Who doesn’t want to believe, to have faith – that spring will follow winter, that the seeds will sprout, that there is beyond all this struggle and worry some real measure of succor, some consolation?

I will say this. It is when I am alone that I move nearest to belief, feel it lurking somewhere near in all that silence. I am not in such moments the stalking fox; I am instead whatever it is that he is stalking: bird or mouse or vole, whatever it might be that’s trying to make its way through the immense and terrifying and beautiful field.

All around: The scent of peach and apple, blossom and root and loam.

And above: The wide, unending sky. 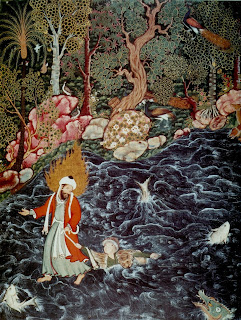