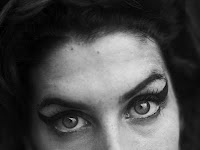 Last night, lying in bed, in my birthday's final hour, I watched an Amy Winehouse concert on television, on a channel I stumbled across trying to find something besides the mid-summer's inconsequential sports scores and the mind-numbing, disgusting debt-ceiling debate. It was an old concert -- from 2007, I think -- but even so it was peculiar, even a bit shocking, to see so soon after  her death Amy Winehouse up on stage in a short sleeveless gingham dress smartly cinched at her Barbie-like waist  -- not full of life, not ever that of course and not even close, but alive nonetheless and on stage and standing up and singing.

And singing, yes, even as she delicately stumbled forward and back, as she peered around from time to time, suddenly afraid, suddenly lost, as she distractedly twirled and patted her fabulous nest of hair, as she began and then, after a hesitant skip and jump, quickly abandoned some sequence of choreographed dance steps, a self-conscious teenager, legs as thin and shapeless as fence-posts, eyes glued to a black and white screen, mimicking the Shirelles or the Ronettes or the Supremes...

Yes, singing, and all the while with that impossibly glorious voice with its endless quaverings and soulful slips and growls, its unpredictable dips and slides and husky quips and slitheringly sweet nasty asides...You should have known from the jump that you always get dumped, so dust off your fuck me pumps.

Singing, yes, with a voice more remarkable -- more anguished and exuberantly alive, imagine that -- than any other I've heard in all my life except for one other: Billie Holiday's, whose pride and torment and little-lost-girl shimmer and squirm and quake and sweet Bourbon hopscotch swing and back of the beat ache are like nothing else you'll ever hear on this earth. You took the part that once was my heart, so why not take all of me.

For my birthday Carrie gave me a small-batch potato vodka from Richmond, raspberry vinegar, pomegranate cosmopolitan mix, black loafers, a white linen shirt. We ate steak and had tomatoes from our garden. Truly, I have everything I need.

Oh, shut up. It has nothing to do with age. It's the same song that has been sung a thousand times. Every poet sings it. Here's Lorca, translated by W.S. Merwin:


Farewell
If I die,
leave the balcony open.


The little boy is eating oranges.
(From my balcony I can see him.)

The reaper is harvesting the wheat.
(From my balcony I can hear him.)


If I die,
leave the balcony open!

Throughout the concert, Amy Winehouse shielded her eyes from the stage lights and peered blindly, helplessly, out into the dark. Finally, she made it clear who she was looking for: her father. He was somewhere up in a private box in the balcony. From the the desolation in her eyes, from their endless searching, it was clear she couldn't find him. 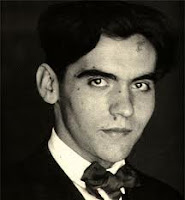 Lorca, of course, loved music -- the music of the gypsies and what he called deep song, a music deeper than all the wells and seas in the world, a music that arises from the first sob and the first kiss.

Lorca was -- like the young Goethe dreaming up Young Werther, like the young Rilke in his own caged and restless pacing, like Whitman listening to the whispering waves -- forever ready for romantic longing, for St. Sebastian's arrows, for pain made flesh. For Lorca pain was, as he described it, a dark woman wanting to catch birds in nets of wind.

So what would Lorca have made of Amy Winehouse?

Deep song always sings in the night, he wrote. It knows neither morning nor evening, mountains nor plains. It has only the night, a wide night steeped in stars. Nothing else matters. It is song without landscape, withdrawn into itself and terrible in the dark. Deep song shoots its arrows of gold right into our heart. In the dark it is a terrifying blue archer whose quiver is never empty.