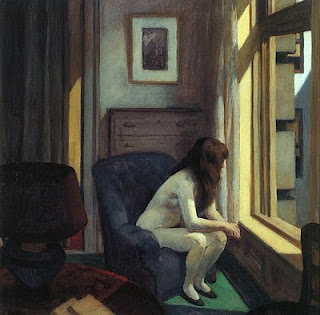 Women in their early twenties  are struck by the shape of things: the bells in a clock tower,  their own wrists, the slope of windowsills, the fine amber necks of bottles, and the foreheads of the men who bring them. In that particularly dangerous hour of the late afternoon when the light is gunmetal and low, their tether to themselves is tenuous,  and when they're walking to and from their homes, or the post office, or that job where they've been sorting files, they're likely to end up looking down at their shadow versions and thinking: what a wild little marionette down there: talking about Faulkner, or going to the ATM, or pulling her hair in behind her neck.  Their parents are aging  audibly thousands of miles away at the end of telephone lines, and the girls are determinedly buying oxford shirts and laundry detergent and matches.
Half  the time they are trailing their fingers through the thick air outside car windows and watching wide cities roll past, they're turning up the volume on CD players and trying to be nowhere but right  there: loud and gorgeous and quick on the side-streets of their own country. They get good at drinking, not for the buzz as much as for the weight of the glass in their hands, or the hush at the back of their throats, or the way that they hope they look by the lit up window with a watered-down whiskey they've been nursing all night. The lines of their bodies against the pitch feel indestructible, and there are moments when they're tempted to hurl themselves at things to prove the point.
The rest of the time, though,  they are trying to cast their eyes ten years or fifteen years into the  future and predict the corners of the rooms they'll live in, some kind of steadiness: an office and cicadas, another body in the front hall, sometimes a child, sometimes not. They're struck by how pedestrian their futures look, and by the fact that they don't mind it.
*
Women at twenty are caught, brief,  dumb and wild, more fragile than they realize. But they know, for just a moment, what men at fifty will rediscover— that the grace of a life is in the small, the mundane, the tangible that looks like refuse: stacks of dusty plates, the caves of their own bodies, the plastic wine glass filled with paper clips and sea-glass on a desk, stacks of papers and postcards and defunct stamps on the broad windowsill. They're bowled over by it all. What they can't imagine, or can only sense in flashes, is that this is important, and that they will forget it and then spend so much just trying to remember.
Posted by Unknown at 1:18 PM