Drop by drop,
gallon by gallon.
Brother, if I could sing,
if I could sing like Allen,
you would know
and understand
how sad it was
when the rain came down.

-- The Mountain Goats, “The Rain Song” 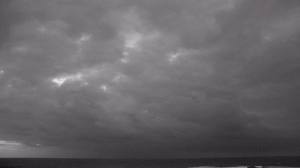 It’s going to rain all week here in Virginia, the remnants of Tropical Storm Lee slogging up the east coast like a stained dish towel slowly covering a bowl of already-bruised, fruit-fly-infested peaches or a tired waitress’s wet gray rag swirling over a dirty formica countertop or the foam-edged tide inching across the cracked shells and oozing jellyfish skins and tar-coated stones of a faded-corduroy-brown Florida panhandle beach stained by the shade of the third-rate timeshare condominiums looming overhead, their dust-specked and dirt-smudged and cobwebbed once-white ceilings plastered with precisely the same swirling patterns as the storm itself.

All of which is to say that the rain – day upon day of it, that is -- makes me regard the world, the natural world, in the worst possible light, which is itself the very darkened light of an overcast sky: not pewter so much as a pale and hoary gray, the gray of expiration, of skin and mold and fire-damaged clothes, of true tin and not aluminum, of an unslaked thirst, a sky with no heaven propped behind it, the dull blanket swept over a pauper’s corpse.

I know that there are words for this, that there’s diagnosis and treatment, an easy cure for what ails me, but there are times when you don’t want to name what you feel. You want instead to burrow down into the comforting imprecision of metaphor. You want to know how I feel? Then I will tell you how I feel. And what I tell you will be everything except the thing itself, for the thing itself is of little interest. It is not how I feel that matters; it is not what I want you to know. It is how I choose to say how I feel that matters, how I bend the objects of the world closer and closer to how I feel without ever truly touching it. That’s one of the key rules, of course: Don’t touch it. Don’t touch it. It hurts too much. (If it sounds to you as if a small child has made the rules, then you already know more – much more – than you thought you did.)

This is why, perhaps, I’ve got a litany of questions for the famous – famous to me; we’ve all got our own – forever scrolling through my head, though they’re always, I’m well aware, the wrong questions, ones unlikely to lead anywhere productive or particularly telling. And some of them, to boot – the questioned famous, that is – are already dead:
Rilke, Lorca, Pistol Pete, my father, Walker Percy, Thelonious Monk, maybe Gandhi and Jesus but only if this were one of those after-dinner who-would-you-invite-to-dinner affairs and I could make some awful rightwing lunatic sit smackdab between them and get a good talking-to. All men, it seems, though I can think of a few women: Billie Holiday. Well, that’s one – though I wouldn’t dare ask her a thing, would simply get down on my knees and beg for one song, even a verse or two of something, anything, a children’s lullaby or a hymn. Because if there was ever someone who knew how to truly answer the question without needing to say the word itself or even directly suggest it, she was it. She was the one.

So here are a few questions for the living:

No, that’s wrong, though it’s true I would like a token or talisman from every person I admire. I need to ask questions that can be answered.

To John Darnielle: What were you thinking when you wrote “The Rain Song”?
To Everyone Else: What is that voice I hear in the distance? Whose voice is it? That quiet one? Yes, that one. Will the news be good?