On "Alpha Rats Nest" and Rilke and Vanishings 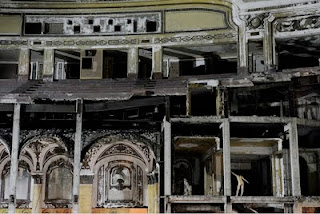 I've been thinking about blindness and the ways that going blind might transform, through memory, through the longing for what has been irretrievably lost, the most mundane scenes into ones of rare and spectacular beauty. Right now, for instance, on this unremarkable early Saturday evening three days past the summer solstice, the setting sun angles through the living room window and cuts along the coiled pink skin of a conch shell, reflects off of a brass lamp stand just beneath its salmon-colored shade, then creates a trapezoid of light on an open art book (Essential Picasso by one Laura Payne, on the cover one of Picasso's seated women, her figure all trapezoids and light and decisive black lines, a swath of  color in her lap simply to suggest her dress).  A patch of the light falls on a blue and white paisley-print Chinese vase and then slips through the glass top of the coffee table to land on the pale green and rusty peach Oriental rug. Then the sun sets further, gone now from the window, and all that detail -- all that color, all those textures, all that sensual light --  disappears. What's left is worn furniture and a faded rug and, of course, me: a tired body, a middle-aged man's aching joints and pinched nerves and wonky eyes. How exactly does one "sing sing sing for the dying of the day"?

My eyes hurt just to look over what I've typed. My vision is blurry, my eyes itchy and throbbing. My pupils look a bit like mismatched black buttons, the right one dilated, clearly larger than the left...How does one "sing for the flames that will rip through here and the smoke that will carry us away?" 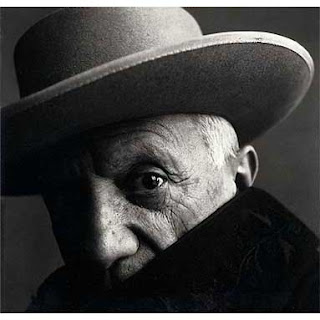 That's all a young man's romantic notion, isn't it -- that destruction and decay might be celebrated.

Is there or is there not beauty in the autumnal, in the dying of the light?


She sat just like the others at the table.
But on second glance, she seemed to hold her cup
a little differently as she picked it up.
She smiled once. It was almost painful.


And when they finished and it was time to stand
and slowly, as chance selected them, they left
and moved through many rooms (they talked and laughed),
I saw her. She was moving far behind


the others, absorbed, like someone who will soon
have to sing before a large assembly;
upon her eyes, which were radiant with joy,
light played as on the surface of a pool.


She followed slowly, taking a long time,
as though there were some obstacle in the way;
and yet: as though, once it was overcome,
she would be beyond all walking, and would fly.

That's a young poet's poem, though. Rilke is, of course, forever and ever a young poet. He died having just turned 51.

It may be that every poet's work is, in the end, about seeing, about representing the interior world through the exterior, the complex resonance of objects and places made corporal. No ideas but in things and these things -- blackbirds, fallen angels, dry leaves, darkened houses, late coffee and oranges in a sunny chair, whistling quail and ripened berries -- are simply the means through which we celebrate the awful knowledge that one day we will not be able to see, that the world will be lost to us.

In his translation of Rilke's "Going Blind," Edward Snow presents in the poem's final stanza the woman slowly following her companions:

as if something still were not surmounted;
and yet: as if, after a crossing over,
she would be done with walking, and would fly.


The "crossing over" here sounds more like death (and resurrection) than it does in Mitchell's use of the more mundane "overcome." But Snow simply suggests that she will be "done with walking" while Mitchell's translation asserts that she will be "beyond all walking." Both of these men are trying to find the right words in English to convey Rilke's notion that with blindness there will be some new -- perhaps richer -- way of seeing.

And again and again in his work Rilke revisits the idea of blindness and seeing -- and of the journey between these two: light dying so that a landscape is transformed, as in the poem "Entrance," here in Snow's translation:


Whoever you are: in the evening step out
of your room, where you know everything;
yours is the last house before the distant:
whoever you are.
With your eyes, which wearily
just free themselves from the worn-out threshold,
very slowly you raise one black tree
and set it against the sky: slender, alone,
And you've made the world. And it's immense
and like a word ripening in silence.
And as your will reaches for its meaning,
tenderly your eyes let it go. . . .

"Our lives / pass in transformation," Rilke writes in his Seventh Elegy. "And all the while the outer realm / is lessening." Until it is gone, as it is for the blind man in "Pont Du Carrousel," who has completely "crossed over" to that other world:

The blind man standing on the bridge,
gray like a boundary stone of nameless kingdoms:
he is perhaps that one unchanging thing
around which the far-off stellar hours revolve,
the silent midpoint of the constellations.
For everything around him strays and struts and runs.


He is the immovable upright one
set down in many tangled paths;
the dark entrance to the underworld
among a surface-dwelling race.

What blindness means is that one has fully entered the world of memory, in which experience has finally and fully been transformed. And of course Rilke has a poem for that as well:


And you wait, you wait for that one thing
that will infinitely enlarge your life;
the gigantic, the stupendous,
the awakening of stones,
depths turned round toward you.


The volumes bound in rust and gold
flicker dimly on the shelves;
and you think of lands traveled across,
of paintings, of the clothes of
women found and lost.


And then suddenly you know: it was then.
You rise, and before you
stands the fear and prayer and shape
of a vanished year.

There it is: all that beauty in our lives, all those terrible, spectacular vanishings: childhood, youth, friendships, love, the seasons, this blackbird, that pear tree, those clothes, these eyes. So maybe there is indeed nothing else to do but to sing sing sing for the dying of the day and for the flames that will rip through here and the smoke that will, in the end, carry every one of us away. 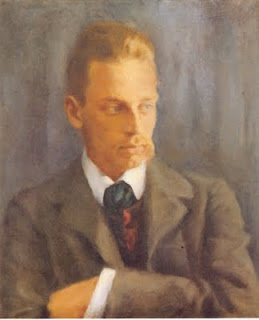